The modern kitchen is very much considered to be the heart of the home. It is where families come together to cook and eat, and in more recent times study, work and socialise in too. They are therefore an area we’re all keen to have looking their best, which means they are prime for innovation and investment.

Today’s kitchens have a tendency towards multi-functional living (a space that works for much more than just cooking and eating) and generally take on a clean, uncluttered appearance. Although huge variation still exists in kitchen cabinet styles, for example shaker style or slab doors, most people are united in wanting a kitchen design that conceals appliances and offers solutions for keeping worksurfaces relatively free of kitchen paraphernalia.

This may be the most commonly sought-after look today, but it has certainly not always been the case. Changing styles and advances in technology have seen kitchen design change enormously over the last 100 years, transforming the kitchen from a functional workspace into the hub of the home. From changing colour schemes to the introduction of integrated appliances, let’s take a look back and see how the modern kitchen has evolved to become the space we all know and love today.

We start our journey back in time in the 1920’s, which rather scarily is now 100 years ago. The Roaring Twenties gave way to a new way of living following the end of the First World War; rules became more relaxed and people enjoyed the freedoms and fashions available to them once again. Technology too was beginning to advance significantly, making life rather easier when it came to domestic duties. During this period many properties were connected to a local water system, delivering clean running water directly to the house, and gas cookers were available which meant the days of using hot wood fires for cooking and heating water were over.

Unlike today’s designs, kitchen fixtures in the 1920’s were usually freestanding, as were the cabinets. Sinks often stood on four-legged units which were open at the bottom, as opposed to the concealed look we favour today which provides extra storage space. Cabinet space was also prioritised as it was essential for storing food as well as cooking implements. However the invention of the refrigerator in 1927 would be a significant game changer in redefining the modern kitchen space.

The recently invented refrigerator became a highly sought-after feature in the 1930’s kitchen, which can be defined by its desire for efficiency and style. It was during this decade that we started to see hints of the modern, sleek kitchens we know and love today, with furniture starting to become more compact and streamlined. Appliances such as gas cookers became taller and slimmer, and along with sinks were built into the countertops; ideal for maximising floor space in a smaller kitchen.

There were also innovations in flooring during this period which saw the introduction of linoleum and the famous checkerboard floor design. In keeping of the theme of efficiency, lino was durable and easy to keep clean, making it the perfect choice for a 1930’s home.

It was during the 1940’s that the idea of a ‘fitted kitchen’ was really established with the design of the ‘Kitchen of Tomorrow’; a model, uniform, kitchen which was displayed in department stores across the country for people to view. The ‘Kitchen of Tomorrow’ paved the way for the idea of sleek, continuous worktops as the marker of a modern kitchen, rather than the independent, freestanding pieces of furniture which had been the norm until then, making a significant shift towards the fitted kitchens we see today.

The function of the kitchen also shifted during this decade, with almost every home incorporating a dining area into the space. Kitchens had traditionally been seen as working areas, but adding comfortable seating transformed the kitchen into the ideal setting for family meals, something we still aspire to today.

Another key innovation in the 1940’s kitchen was the arrival of the washing machine. It was during this decade that the Wringer washing machine became a must-have item in the modern British kitchen. It allowed clothes to be washed and dried by one machine, much more quickly than any of the previous methods that had been available. Although technology has moved on immeasurably since then, the presence of a washing machine in the kitchen remains today.

The kitchen designs of the 1950’s are iconic, with many of us able to conjure up strong images of them today. In fact, the bubble shaped, pastel coloured appliances are still seen in many contemporary kitchens looking to achieve a vintage, kitsch feel. SMEG fridges are a great example of the retro design we still love today.

The checkerboard flooring introduced in the previous decade remained very popular but was paired with pastel coloured cabinets, made from metal as opposed to wood. Green, yellow and pink were highly sought after colours, with many households choosing to make a real statement by matching their cupboards to their appliances.

The 1950’s also saw the end of rationing which meant kitchens were once again becoming joyous places to be. Cupboards and fridges were packed with tasty ingredients once again, putting meal times back at the centre of family life.

If the 50’s were all about pastel colours, the 60’s were all about being loud, proud and vibrant. We are no doubt all familiar with the orange, flower power inspired décor of the swinging 60’s, where homeowners sought to make their home furnishings as unique as possible.

In the decade of peace and love the advancements in home technology came thick and fast, with modern appliances such as freezers, dishwashers and blenders becoming readily available to all, making domestic life easier than ever before.

The types of food available during this period changed hugely too, with the days of post-war austerity long forgotten. Produce like chicken became much more attainable and affordable, allowing people to enjoy cooking in their kitchens in a way that they hadn’t before.

Despite initial appearances, the 1970’s kitchen has many similarities with our modern day designs. Kitchens in the 70’s featured a seamless look, with handle-less cabinets and space-enhancing fixtures. It wouldn’t have been uncommon during this period to see an integrated oven or even a microwave, which were highly desirable during this decade.

Things the kitchens of the 1970’s do not have in common with their modern counterparts include a penchant for avocado green and brown! Earthy colour palettes were the height of sophistication during the 1970’s, creating a cosy and more relaxing vibe than we had seen in the previous decade.

The taste for avocado green (thankfully) didn’t last for too long and by the time the 1980’s rolled around the fashion was for lighter, brighter décor than we had seen in the previous two decades. Neutral colour palettes were deemed the fashionable choice, with ivory cupboards and worksurfaces and natural light being favoured by many.

The ‘U’ shaped kitchen design, still popular today, was highly on trend in the 80’s, with uninterrupted worksurfaces reaching around three walls for a sleek but practical look. In contrast to the fashion of the 80’s, which was loud and vibrant, kitchen colour schemes were much more muted. Appliances were largely available in just black, white or ivory, giving the kitchen a much more uniform look in real contrast to the fashion for individuality seen in the previous two decades.

Many of us will be incredibly familiar with the kitchen trends of the 1990’s, having either bought one or lived in a home with one as a child. 90’s kitchen fashions tended to have a more country feel than the kitchens we see today, with farmhouse style patterns in kitchen cabinets and delicately detailed door handles. Colour palettes remained quite muted as we’d seen in the 80’s, but natural looking materials such as wood were introduced more often. Laminate was a very popular material in 1990’s kitchen design, with laminate worktops being a very popular choice.

The trend for kitchen/dining spaces shifted once again during the 90’s, with kitchens becoming smaller and separate formal dining rooms becoming popular once again. Kitchens were seen as functional workspaces, simply needed to prepare meals, in shift away from their function in previous decades.

In our opinion today’s modern kitchens incorporate all of the best bits of kitchen design from the last 100 years. Kitchen design today very much subscribes to the notion that the kitchen is the heart of the home, much more than a space we simply prepare food in. Dining spaces within the kitchen are once again incredibly popular, either in the form of a traditional table and chairs, or an island/breakfast bar set up – we want to encourage families to sit and eat together at the beginning and end of each day.

Our kitchens are sleek, highly functional spaces that importantly incorporate the personality and individuality of the family we are designing for. It is reflected in things such as colour palette, for which the choice is vast, and in the special features we include which make the space work just that bit better for them.

We are also blessed to live in a time where technology can make our lives so much easier. From boiling water taps to smart appliances, we have so much technology at the tips of our fingers to make household chores faster and more efficient. All that means we have more time to enjoy the beautiful kitchen we have created.

Is your kitchen stuck in time and in need of updating? Why not get in touch with Kitchenroom for a FREE home design visit and state of the art CAD design? We cover the entire Oxfordshire area and beyond, including Didcot, Oxford, Abingdon, Wantage, Wallingford, Grove, Newbury, Henley on Thames.

With over 30 different kitchen styles available, we can help you find the perfect one to make your dream a reality. What’s more, with Kitchenroom you can always be assured of:

Why not take a look at some of our recently completed kitchen installations?

Click here to see our range of fitted kitchens. How to update your kitchen on a budget

A kitchen upgrade is one of the best investments you could ever make for your home. However, not all... read more

6 Ways to Create a Kitchen Fit for a Queen

This year we are proudly celebrating the Queen’s Platinum Jubilee, making Her Majesty the first British monarch to mark... read more Every kitchen has a particular style to it. When your home was built originally, the contractors probably built a... read more What is the best type of flooring for kitchens?

There is a good reason why kitchens don’t have carpets. Kitchens are messy places where food could fall or... read more Just how much value can a new kitchen add to your home?

The last year has certainly been one like no other, and as we have been collectively confined to our... read more When it comes to Fitted kitchens there is a lot of choice, but if it's personal customer service and... read more 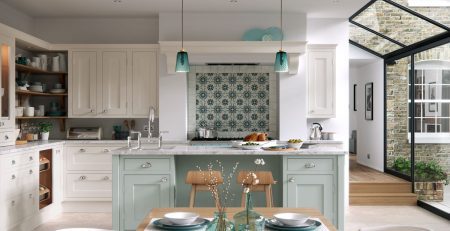 When were kitchens invented?

Have you ever wondered how long kitchens have been around? Well, it depends on your definition of a “kitchen.”... read more You’ve decided to buy a new fitted kitchen! Amazing! There are few home improvement projects as exciting as getting... read more